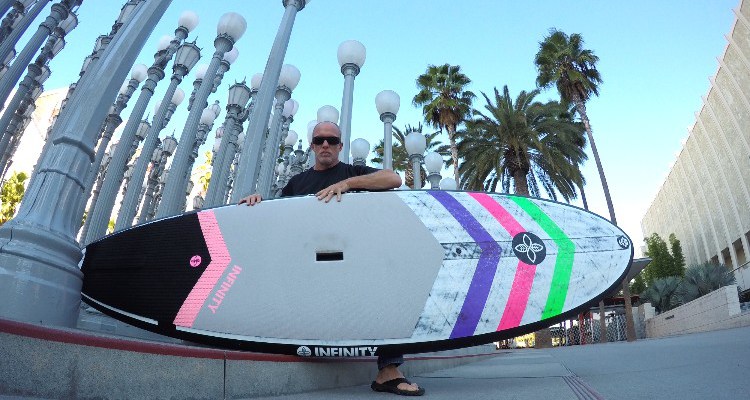 Design Matters: The Magic of the Infinity New Deal

There are any number of superlatives which may be used to describe a great shape. For me, the one which most effectively sums up the essence of the Infinity New Deal is one of a kind. Only a handful of brands have dared to boast a claim of having a performance longboard SUP. One or two more are poised to wager they have what it takes when their 2018 lineup hits shops in the coming months. I’m willing to bet that none will come close to match the unrivaled performance of the New Deal as I’ve experienced it first hand.

Let’s start with the depth of knowledge which went into the design, something I like to think of as board shaping IQ. The Infinity New Deal was designed by Dave Boehne, the son of Hall of Fame Shaper Steve Boehne. Dave is a bass ass shaper in his own right and is a consummate student of SUP design. Math has never been my strong suit, but assuming Dave learned a thing or two from his father about shaping one could posit there is roughly a combined 100+ years of knowledge that went into designing the board. Can anyone else match that?

I’ve been surfing the Infinity New Deal for a few months now and as I’ve written in the past, my surfing background only goes back a few years. There is no doubt the board has enabled me to improve my skills. Equally important, having the New Deal under my feet has given me complete confidence in my equipment. If I botch a wave, it’s on me as I’ve yet to scratch the upper limits of the board’s complete capabilities. Put it another way, the Infinity New Deal is a performance longboard shape that you can grow with. Super fun right out of the box and it gets better each time I take it out.

OnIt Pro, Shelta Hats, Quickblade Paddles, New Deal, Infinity New Deal, LACMA, Los Angeles County Museum of Art, Merrell, Dave Boehne, SUP Examiner, Infinity SUP, Infinity Surfboards, Matt ChebatorisI’ve conquered everything from 1 ft ankle slappers at Doheny to overhead waves at the Palos Verdes Cove surfing the New Deal. I view each increment in wave size as an opportunity to practice getting the most out of the board’s design features. On smaller waves I enjoy stepping back on the arch bar, digging in the thrusters and practicing turns. As the waves increase in size, I work on stepping back quickly, sinking the rail to carve and controlling the board at higher speeds. Then of course comes cross-stepping to ride the nose. I’m still working on it, but have consistently been able to make it to the pink stripe and back. Like paddling out through the impact zone, the key it to fully commit when the timing is right. I also study Mike Muir’s Instagram feed for style tips!

The level of detail which went into designing all of the board’s features is unmatched. From the thin foiled out rails enabling the board to carve, the deckpad construction combining two textures of foam, a great recessed carbon fiber handle so you can comfortably pick up the board, to the tight pintail facilitating speed. It has the appearance of a torpedo and I don’t think I’ve ever had a surf session where at least one person didn’t comment on the board. The Infinity New Deal is revolutionary. It is a head turner. A true performance longboard SUP. One of a kind.