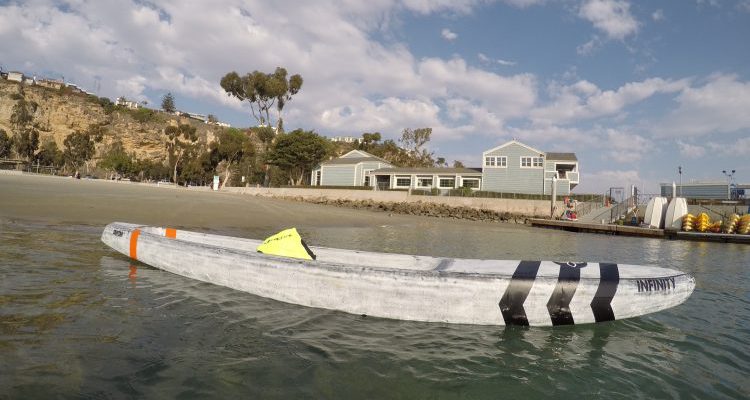 Tapping into the trend towards dugout style SUPs emanating from Australia, Infinity SUP has decided to offer their new Downtown standup paddleboard as a dugout, in addition to a more traditional flat deck configuration. For those who’ve been off the grid the past few months, the Downtown is Infinity’s new downwind / rough water board. Designed with racing in mind, the Infinity Downtown is offered solely as a 14-fter and available in custom or production constructions. I caught up with Infinity’s Dave Boehne late last year to get an overview of the new design and took one out for some water trials on a blustery winter day in Dana Point, California.

There is a groundswell of interest and hype around the new design and I’m curious to see how the paddling community reacts once the new boards hit showroom floors in shops around the world. Infinity SUP’s dugout variant begins with the same foundation as the Downtown’s flat deck model, but that is where the similarities end. A quick visual alone signals that this is a different board.

The most obvious difference is the 10 inch sunken cockpit and massive bulbous nose. Yes, the high walls on surrounding the deck give the board a bathtub look. Definitely different from most SUPs and a departure from the flatdeck style boards Infinity produced in 2017.

I’ve been paddling a well-regarded downwind specific board from another company for a few years now and was curious to see how the Downtown performed. It was also my first time paddling a dugout style SUP.

I launched from Baby Beach inside Dana Point Harbor on the 24 inch wide monster and made my way down the main channel towards the harbor mouth. The width of the Infinity Downtown I tested is narrower than my 27.25 inch wide personal downwind board, but I felt perfectly fine inside the harbor. What I noticed immediately upon getting the board up to speed was the glide. Many downwind boards push water and by virtue of being designed for rough water, then tend to be a bit of a chore to paddle in the flats. By comparison, Dave Boehne incorporated an intricate single concave to the Downtown’s belly which releases water and creates a lively pop when paddling. Make no mistake, the flatwater glide doesn’t begin to compete with a dedicated flatwater design, but it is much, much smoother than I expected.

Bottom Line: the Infinity Downtown is not a board I would dread paddling through a harbor before or after a session in open water. Best of all, the ease at which the Downtown locked onto boat wakes and accelerated is just like paddling an OC-1.

As I approached the harbor mouth and prepared to make my way up wind through the intense wind chop I recalled Boehne telling me I would fall before the board would flip. With my knees bent and head up I worked to settle into a cadence as I bounced over the waves towards the bell buoy marking the entrance. The wind and waves were so intense that I knew making it to the bell buoy was going to be an accomplishment.

Paddling up wind on a SUP optimized for downwind glides is a bit counterintuitive, but on an out and back course it simply goes with the territory. I’m used to my personal board making an violent up and down slapping against oncoming waves when paddling up wind. I was pleasantly surprised to discover that the performance of the Infinity Downtown generated a distinct skipping motion. The bulbous nose volume kept the board feeling light and nimble.

I had my first fall after I completed a left shoulder turn near the bell buoy as I lined up for the initial downwind leg of what became four out and backs. And as predicted, I popped out/off of the board and watched as the Downtown automatically stabilize itself like a self righting boat. Getting back on the board was a bit difficult at first. After failing to scale the high rails in the rough water a couple of times I realized I needed a different strategy. I placed my paddle inside the dugout standing area and pulled myself up and in like I was doing a water change in an OC-6. Basically surging my torso up and over the high rail before swinging my legs back in.

Paddling downwind on the Infinity Downtown was unlike anything I have experienced on a SUP. I’ve done some super fun downwinders, but the ease at which the Downtown got on a bump and stayed on glide was unreal. Again, the way the board performed downwind was much closer to a downwinding experience on OC-1 than I expected from a SUP.

The massive amount of volume in the nose keeps the board up and running. Yes, it will still perl if the waves are steep – I managed to stick it while experimenting with how far I needed to step back. For most “normal” downwind situations, however, I don’t anticipate paddlers will have to step back very far towards the tail when paddling the Infinity Downtown dugout. The increased volume which inherently comes with a dugout board keeps the board feeling maneuverable on the water and gives it a distinct pop which is ideally suited for paddling in rough water. The aptly named Downtown surges down bumps with the same acceleration and thrill experienced when taking the initial drop on a roller coaster. Paddling the board was a lot of fun and a much different downwind experience than I was expecting.

Will dugout boards become as ubiquitous here in the U.S. as they are in Australia? It is hard to say. At the moment I think I can probably list the number of SoCal paddlers with a dugout board on one hand. After my initial experience paddling the Infinity Downtown the advantages to having a dugout SUP in rough water are clear. Overall stability is significantly greater than a flat deck. The high volume nose and steep rails also offer the opportunity for paddlers to experiment with different techniques of trimming the board – think of a sailboat, one seasoned veteran paddler told me.

Yes dugout SUPs do look different, but I think they are more than just a passing trend. The benefits are more oriented to fitness paddlers and athletes who paddle in open water, e.g. I don’t expect to see a dugout version of a 10’6” all around anytime soon. But for paddlers looking for a design advantage in rough water, I anticipate dugout boards will continue to chip away for a share of the market.